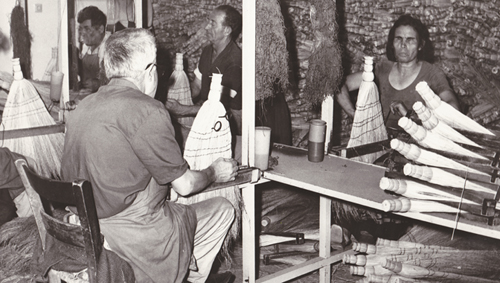 1946: The beginning of a great vision

At a time when the blind of the country were experiencing a severe social exclusion and there were no social welfare programs, there were some significant people with increased social sensitivity, pioneering ideas and initiatives who kindly spent time, money and efforts for the establishment of the LIGHTHOUSE FOR THE BLIND OF GREECE. Thanks to this major movement, a new era in the field of provision to the visually impaired community was set, continuing successfully up to now, with unique services, innovative programs and good practices developed.

That same year, the founding member Michael Tsamados, donated the entire area, where the privately owned facilities of the Lighthouse for the Blind of Greece are located today.

In 1951 a two-floor building at 198 Doiranis Street–Kallithea was built thanks to a donation by Georgios and Evgenia Empirikos. The building originally housed all services of the association, along with the Brooms and Brushes Workshop.

In 1954, was a significant year for the field of the professional rehabilitation of the blind, thanks to the approval of the Royal decree Law 2765/54, which stated the need for support of the products of the Brushes and Brooms Workshop by the Armed Forces, the Municipalities and Public Bodies through direct assignment. At that time Lavria Protopapadaki was the President of Board of Directors.

In 1955 Theodoros Petrakopoulos proceeded to the donation of a 400 m2 building, which was originally used as boarding house, whereas from 1984 and onwards that is where the Metal Processing Unit has been hosted.

In 1955 was also the year when the pioneer Phone Operators School for blind people was established, which was hosted at the building on Doiranis Street.

In 1976 the Brooms and Brushes Workshop and the administrative services were transfered to the newly built main building, donated by the American Friends Organization.

In 1978 the second floor was built through donation from the General Secretary, Lina Resti.

In 1984 the Tactual Museum was founded under the presidence of Lavredia Protopapadaki and the management of Manolis Kefakis.

In 1990 emerged the bequest of Fanis Mavroudis-Theodoropoulou, member of the Board of Directors for years, which ever since it has been supporting a large part of the activities of the Lighthouse.

In 1997 the Lighthouse for the Blind in Greece was certified as a Specialized Centre of Vocational Training and in the framework of its program, it conducted computer training programs, for specializations necessary for its Workshops etc.

In March 2004, the Tactual Museum reopened, after the devastating earthquake of 1999 thanks to the major support of the American Friends of the Blind and the Ministry of Health and Social Welfare. At that period, thanks to the donations of Mr Taxiarchis Varelas and the Bank of Greece and the purchase of lift for people with special needs, the Tactual Museum became accessible to people with mobility difficulties.

The reopening of the Tactual Museum was made by Mr Kostis Stefanopoulos, President of the Hellenic Republic at that time.

In September 2004 the Assembly Department started its operation thanks to the valuable support of Siemens.

In 2005 thanks to a great donation by the George Vergottis Memorial Fund Stiftung, the Training and Rehabilitation Centre for people with visual impairments was founded. An also major project thanks to their donation, was the creation of 2 shelter apartments for visually impaired people with financial problems from the province, who cannot afford their staying in Athens for the attendance of educational programs.

In 2006 there was a significant donation of an advanced type of BRAILLO SW 440 2006 printer from the "Stavros Niarchos" Foundation for the printing of books and magazines in Braille and a donation of an audio system for the Recording Studio.

In 2007 thanks to the support of the "Stavros Niarchos" Foundation, the digitization of the audio material in the Lending Library of Talking Books according to the new technology. Ιn 2007, in the framework of installation programs of Photovoltaic Elements in buildings housed by Non-Governmental Organizations, the "Stavros Niarchos" Foundation financed a relevant installation in the main building of the Lighthouse for the Blind in Greece.

In 2009 there was a collaboration established with the Vocational Training Center of Athens for the disabled people, for the professional specialization of unemployed visually impaired people in the fields of a."Ceramic-Sculpture” & b. New technologies - Computer learning and administrative support. This program is still under operation.

In 2010 the Linen Workshop of the association was created.

Το 2012 the association acquired upon request and relevant evaluation, the type B and C managerial capacity for 2007-2013.

In 2013 the Lighthouse was registered at the registry of Informal Learning of the Lifelong Learning Secretariat of the Ministry of Education.

Between 2013-2015 the Social Services Department implemented, thanks to the valuable support of the Stavros Niarchos Foundation, the specialized Program "Accompanying and Consulting Support Services".

In 2014, thanks to valuable support of the TIMA Charitable Foundation the Metal Processing Unit was equipped with a new mechanical press for the production of metal products.

In 2015 thanks to valuable support of the John S. Latsis’ Public Benefit Foundation, the Social Services Department launched the specialized "Providing Social Care for Vulnerable Groups of Blind Programme".

In 2016, thanks to the valuable support of the TIMA Charitable Foundation a great project of renovation works in the three audio books recording Studios for the sound insulation was fulfilled, insuring this way the quality of the audio book production, as well as the working conditions of the Lighthouse’s personnel-readers.

In 2016, thanks to valuable donations of the Hellenic Parliament, the Ministry of Culture and the American Friends of the Blind of Greece there were reparation works at the Tactual Museum because of building damages and its reoperation after months of pause of actions was achieved.

Between 2016-2017 the pioneering "Skills Development and Employment Promotion Programme for blind and visually impaired people" is launched thanks to the valuable support of the Ioannis S. Latsis Public Benefit Foundation.

In 2017 there was a cooperation launched between the Tactual Museum and the National Historical Museum of Greece (NHM) in terms of the project “A Touch of History!”, that was co-founded by the Stavros Niarchos Foundation through the Cultural Heritage without Borders in Bosnia and Herzegovina/Balkan Museum Network, in the context of the wider effort to promote accessibility, the transcription of their forms and the explanatory inscriptions of their exhibits of the country's museums in Braille blind writing.

In 2017, the association started its operation as a Certified Computer & New Technologies Knowledge Center for visually impaired people.

In 2017 a pioneering cooperation was signed between the Lighthouse and the EYDAP S.A. (Athens Water Supply and Sewerage Company) for the issuance of accessible bills for blind consumers in all water supply and sewerage services.

In 2018, the "Erasmus Plus-AMUSING 1" 2-year Program was launched, with the participation of 4 countries and the representation of our country by the Touch Museum, regarding the role of Museums in educational inclusion.

In 2018, the association in cooperation with the Research Center of the University of Piraeus and the Computer Vision Systems IRIDA Labs SA, inaugurated the project "Innovative Applications of Digital Escort of Autonomous Navigation for the visually impaired ones" Entrepreneurship and Innovation (EPANEK) ", NSRF 2014-2020.

In the period 2018-2019, there was implementation of the “Health Promotion & active ageing for the blind” Program, by our Social Services Department, further to valuable donation of the TIMA Charitable Foundation.

In September 2019,the association participated as a Partner in the 2-year European Program Erasmus+ ΚΑ2 «Adapting Museums for educational Inclusive Goals», with the contribution of the Tactual Museum to the educational, cultural and social integration of the visually impaired students.

In 2019, the association implemented the Program: ‘‘Αctions of Cultural and Artistic Inclusion of blind and visually impaired people for combating discrimination: Promotion and communication of cultural actions, creation of opportunities for equal participation and coexistence’’ under the financial support and the auspices of the Ministry of Culture and Sports.

In 2020, the association implemented the action entitled: ‘‘Cultural actions and programs for promoting the catholic access of blind and visually impaired people to culture’’ under the financial support and the auspices of the Ministry of Culture and Sports.

In 2021, the association implements the action "Cultural actions and programmes to promote universal accessibility to culture for blind and visually impaired people" with the financial support and under the auspices of the Ministry of Culture and Sports.

In 2021 the project "Creation of a Digital Museum of Touch" is also being implemented with the financial support of the Ministry of Culture and Sports.

In 2021 the project "Creation of a Digital Platform of Talking Books of the Lighthouse for the Blind of Greece" will be completed, with the support of the A.G. Leventis Foundation.